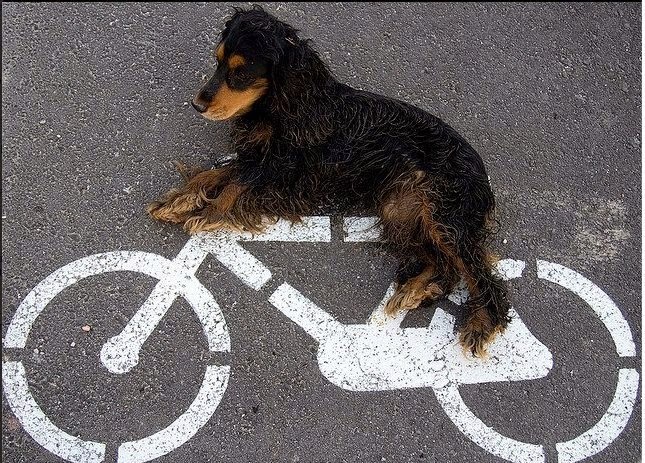 Day 1:
We took the bike out at night, Bear and I – mainly so that there was less of a chance of other people watching our complete and utter lack of grace.
It was hard.
Harder than I remember it being – just riding around the block took us an hour, ridiculous amounts of sweat and a great deal of panting.

Both Bear and I are out of shape, that’s a given, but it was staggering to see just how out of shape we were….
Bear needed to relearn the parameters of the bike, how to move with it, how not to cross in front of it….how to adjust his pacing….
Thankfully he never forgot the hard-learned lesson of staying on the right side of trees, posts and signs, or things could have ended a great deal more painfully.

As for me…well, I need a great deal more work.  First there’s all my “winter weight” (but we’re not going to talk about weight right now.  There’s too much to get into and nowhere near enough desire to air everything out) and then of course there’s the loss of my bike legs, my form and my stamina.  It’s incredible how much can go out the window in 6 months.
In all honesty, I could have kept it up.  I could have gone down to the gym and plopped myself down on one of the stationary bikes, but excuses are plentiful and oh-so-convincing in the cold winter months…

But we did it.
We toured the block on two wheels and four paws.
There were frequent pauses for breath (and the occasional sniff and pee requirement), but we did it.
It doesn’t matter that we both collapsed in a heap of exhausted panting the second we got home.
It doesn’t matter that it took a good 20 minutes before I was ready to get up and stretch out my legs properly.
What matters is that we did it – and so long as the weather holds, we’ll KEEP doing it until it gets easier, and then we’ll start branching out – adding distance and building up our stamina.

Maybe it won’t be enough to ride a full 25k by the 31st of May – but I’ll be damned if we give up before we’ve even started.

Want to lend your support?
Visit our Personal Page --> HERE