Do Dogs REALLY Like Being Dressed Up For Halloween? 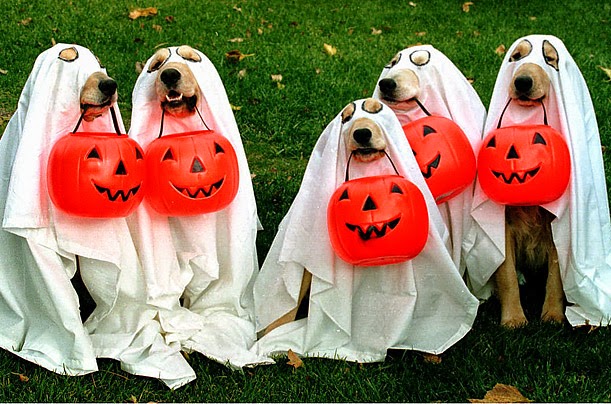 Like many pet owners, I have, on occasion, dressed up my dog. Bear has been trussed up and presented as an old English Gentleman (complete with top hat, tie and vest) two years running, but there have been some mumbling and murmurings within the pet-parent comumunity that suggest that dressing your pooch up as a pink princess, superhero or food item may actually be considered "cruel" by some circles.
Alexandra Horowitz, a dog expert who teaches psychology, animal behavior and canid cognition at Barnard College in New York, says that while dressing up the dog for Halloween may delight the owner, the dog most likely is not amused.

Ms. Horowitz, author of “Inside of a Dog: What Dogs See, Smell and Know,” notes, though, that the experience of wearing a costume isn’t “entirely torturous” for your pet.To put raiments on a dog is to blithely ignore his essential dogness. Consider the Canis part of his heritage. Both wolves and dogs are descended from some wolflike ancestor; thus, we might look at the behavior of the dog’s cousin, the present-day wolf (Canis lupus), in order to provide one explanation for dog behavior. Among wolves, one animal may “stand over” another: literally placing his body on top of and touching the other, as a scolding or a mild putting-in-one’s-place. To a dog, a costume, fitting tight around the dog’s midriff and back, might well reproduce that ancestral feeling. So the principal experience of wearing a costume would not be the experience of festivity; rather, the costume produces the discomfiting feeling that someone higher ranking is nearby. This interpretation is borne out by many dogs’ behavior when getting dressed in a costume: they may freeze in place as if they are being “dominated” — and soon try to dislodge the garments by shaking, pawing or rolling in something so foul that it necessitates immediate disrobing.

But it's not all bad.  She also goes on to state that:


By submitting to be a jack-o-lantern, hot dog (with bun), biker dude or princess, the dog gains something valuable. He gets your attention, and probably an extra round of liver treats. Aside from the liver, there is little as nourishing to a dog as the attention of his owner.

To learn more, read the full article, “On Dressing Up Your Pets,”

Bark back at us and let us know: How does your pooch react to being dressed up for Halloween?