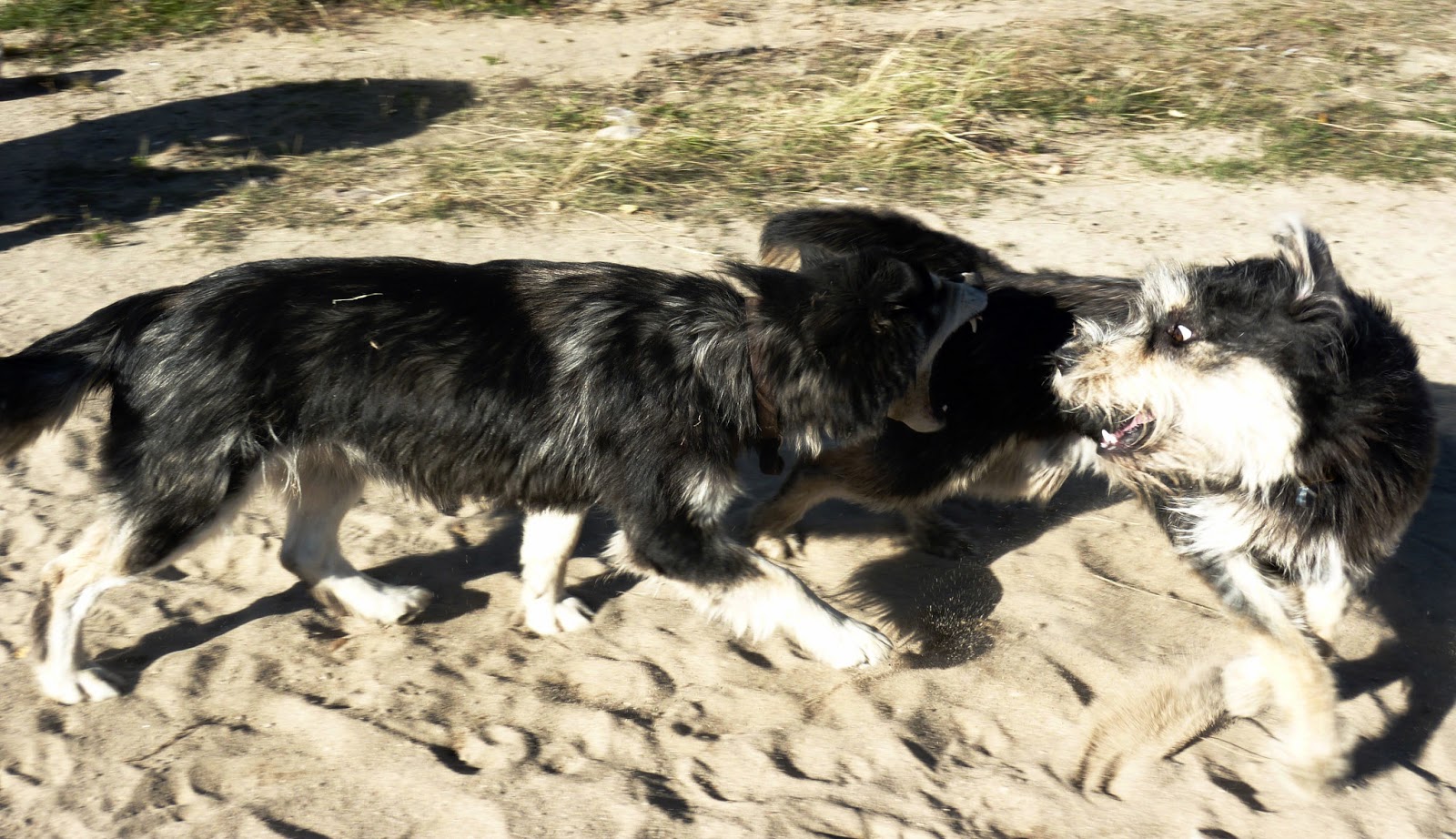 Watching dogs play is quite an easy task, but distinguishing playing from fighting can be a whole different story. Problem is, during play dogs often use postures and vocalizations that resemble those taking place during a fight. So how do you know if Good Dog Charles is suddenly turning into Cujo? For a start, stop reading that book or newspaper at the doggie park; start reading your dog's body language instead.

A good way to tell if your dog's has a desire for peaceful interaction is by looking for specific metasignals. These are signals dogs send to each other to communicate a desire to play and that whatever happens next is not to be taken seriously. In the human world, this is similar to smiling or using a certain tone of voice to tell a friend you're just kidding. The play bow is an example of a fancy metasignal denoting that all ensuing growls, snaps and pounces that follow are not signs of an impending war, explains dog trainer Jolanta Benal.

When dogs play, you will notice how the dogs engage in frequent role reversal. One moment Rover is chasing and playfully nipping, the next he is pinned to the ground by the other dog. Being on the top and then on the bottom, chasing and then being chased, are signs of balanced play, according to the Association of Pet Dog Trainers. Play should also be bouncy, and you should see wiggly bodies, open relaxed mouths and happy back-and-forth play.

Just as a dad would wrestle lightly and carefully with a child, a dog during play will avoid playing as hard as he can. During doggie play, dogs will inhibit their bite, run slower than usual and make lighter body slams than they actually can. In healthy play, the stronger, faster individual will inhibit his speed and strength to match that of his playmate, explains certified applied animal behaviorist Patricia McConnell.

Not all dogs want to mingle or are in the " just wanna have fun" state of mind. It's not unusual to see a dog eliciting a dog to play and the other dog walking away and giving out "cut-off" or "leave me alone" signals. Sometimes bold dogs with rough-and-tumble play styles may try to bully more reserved dogs, according to Animal Humane Society. In this case, the more timid dog may keep his ears flattened and his body low, and he may engage in frequent lip-licking. Ignoring such cut-off signals may allow things to escalate into a real fight.

So when is play getting out of hand, and when should you intervene? Generally, excessive mounting, following a dog incessantly, non-stop running, staring, showing teeth, pinning a dog to the ground and standing stiffly over him, full-speed body slams, placing the head repeatedly on a dog's back or neck and general bullying behaviors should be red flags that will require your intervention, according to the Association of Pet Dog Trainers.

An ounce of prevention is worth a pound of cure when it comes to watching your dogs play. Learn how to read doggie body language and recognize the first signs of stress. If you notice a play session is going south and needs your intervention, don't panic. Screaming at your dog will only escalate the tension and make things worse. It's a good idea to always play it safe and keep some anti-fight supplies always handy. A blanket to toss over the dogs or a noise-making item to distract them, such as a metal can filled with pennies or a small air horn purchased from a marine supply store, may serve the purpose, according to the Pet Professional Guild.


The Other End of the Leash: Play and Self Handicapping


Pet Professional Guild: How to Break Up Dog Fights [PDF]