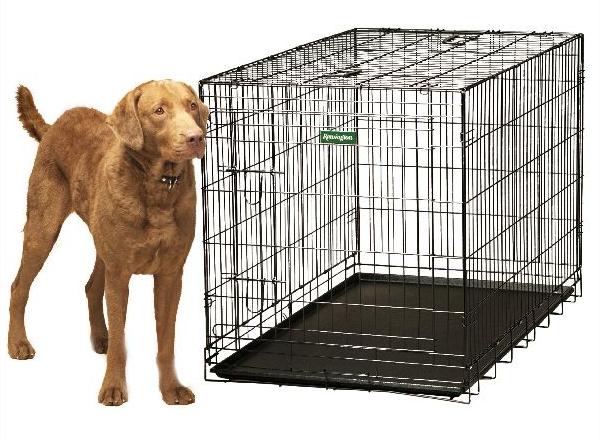 It is something I've seen so many times, I've lost count – pet owners crating their dogs for hours while they are out at work or a social gathering.  This is usually done because everyone knows that if Fido were left to roam around the house for the hours that he is alone, he would probably trash the place.  To me, this is a very confusing thing.  Yes, when he was a puppy Bear devastate my house – I would come home to a new disaster every day (the time he oh-so-helpfully decided to unpack my grocery delivery stands out rather vividly), but I worked hard to make sure that I was slowly training him out of his destructive habits.  By the time he was a year old, I could trust Bear to stay at home and do no more damage than the scattering of his toys in random places around the house.
Maybe it’s a personal bias of mine, but I’ve always felt that owners who choose to crate their dogs instead of taking the time to train them are taking the easy way out.

Now various Canadian animal rescue services are calling the collapsible metal cages used by many dog owners to house their untrained furry friends dangerous and liable to cause some very serious injuries.  K-911, a Montreal based Animal Ambulance has been responding to a growing number of serious injury cases where crated dogs have had their toes or paws trapped in the metal, fold-able cages.  And due to the nature of the injuries being sustained, often by the time they arrive, the dog is in so much pain that the cage has to be cut with bolt cutters.
Veterinary Surgeon Elaine Madore has added her voice to those already calling for improvements to be made on current metal/wire dog cage models.  As a pet surgeon, Madore said that it is not unusual for injuries cause by metal dog cages to be serious enough to require amputation.  Sometimes, pets that have become trapped in their cages are lucky enough to walk away with minor fractures, but that is not often the case.

For now, rescue services have been petitioning various crate building companies to re-evaluate their designs based on the number of injured dogs, but like with most large corporations, these companies have shrugged their shoulders and pinned the blame on the dog owners, stating rather firmly that “people who train their dogs properly” will avoid crate-related injuries entirely.  As it stands, the recommendation from the Canadian animal rescue is to “avoid metal cages altogether, but if they are necessary, then pet owners should make sure that no part of their pet’s paw can fit underneath the cage’s door.”