Free To a Good Home....(or moderately decent one) 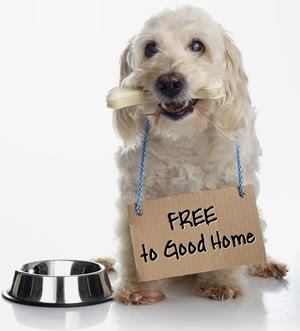 This recently slid across my Facebook news-feed.  Take a few minutes to read it, and maybe even pass it on.  Not only is it well-worth the read (READ TO THE END!!), but anyone looking to adopt, buy or (heaven forbid) give up an dog (or other pet for that matter) could definitely learn a few things.


"Hi, I have a 2 year old pure bred Great Shepdanepoo that needs to be re-homed. That's right he's a one of kind designer mutt. His mom was a German Shepherd and dad a Great Dane. Heck there might be some unicorn in there. I threw in the poo b/c it seems to make him more appealing. Sadly I can't keep him anymore. When I first adopted him I never ever thought that I might have to move. Apparently, no pets are allowed anywhere in this country besides where I currently live. Also, I think I'm pregnant so it's okay to give him up, right? I would never do that to my future kid though. Don't worry I'll never tell my child I owned a dog only to give him up. B/c that would be teaching him or her that when life gets hard just dump your problems onto someone else and make excuses for your own lack of responsibility.Anyways, this dog is annoying. He requires a solid exercise routine. I have to exercise him mentally and physically (that's right both kinds of exercise) for 3 hours almost everyday. I have to be out of the house by 5 am (rain or shine) to go on a bike ride with him for 45 mins. Then I play fetch, tug o war, hide n seek and other games. Followed by some training. This is all done before I go to work so he can stay asleep in his crate until I come back about 8 hours later. When I do come back I have to play with him some more, ughhhh. If I don't do this he whines and yelps the rest of the day. Who would have thought that a GSD mix would have this much energy.He slobbers and farts a lot. He always manages to get water onto my kitchen floor instead of into his mouth. He eats everything, seriously, everything. I have to make sure that my floors are free of socks, leather/cloth materials, tissue paper, really any paper, certain shoes and small plastic things b/c he will eat it. I have to be so tidy and clean now, its frustrating. He snores like a trombone. Don't be fooled by his 80 lb body my friend b/c he is a lap dog, whether you like it or not. He barks like a maniac at anyone who walks past my fenced backyard (esp. if he hasn't been exercised). Meaning, I actually have to go outside and tell him to be quiet, otherwise he won't stop. He tracks in a s*** ton of mud. When he's sick I have to take him to the vet or else he just lies there looking lifeless. Btws, who would have thought that seeking services from a professional who went to school for 8 years or so would be expensive, really. Blows my mind.He is great w/ kids, cats, and other dogs. But he must be supervised while around them b/c of his size. He is not super friendly towards adult strangers, just aloof. In fact, don't expect to be walking Lassie down the street. He is no eye candy. When I baby sit my mom's pure/well bred husky everybody runs up to me. Sh** ppl stop cars to come pet the husky (no joke). But when I walk my dog most ppl. just want to get to the other side of the street to avoid him; I guess he is scary looking . He does walk well on a leash but you need to be strong and firm b/c if he sees a rabbit, fox, deer, squirrel, or bicyclist (random right) he will try to run after it. So you must know how to handle that situation (and hitting him is not handling it).All in all, when I first went to go adopt a dog I was really looking for a dog like lassie. He is nothing like it. What a disappointment. He is up to date on all his shots, according to the second family that returned him to the shelter. Yep, his balls are gone but his sack is still there. I've changed my mind he is no longer free. There is a re-homing fee of $300.00. I want to recoup some of the money I spent on him. Heck, I'll even throw in the cat for free. She is also a lot of work; I have to clean her litter box everyday, pet her and play with her w/ a piece of string. I just don't think I have time or money for that.Never mind, who am I kidding. Despite everything I mentioned above I love him to death. This dog loves me despite the many flaws I have. He has loved me better than most men I have been with. And I am willing to put in the time, money and effort to keep him. B/c I know that this kind of unconditional love is hard to come by. Hope everyone here may come to that realization themselves. "


Remember, a dog's love is unconditional and forever.  They give us every part of themselves completely, it's only fair that we do the same for them.