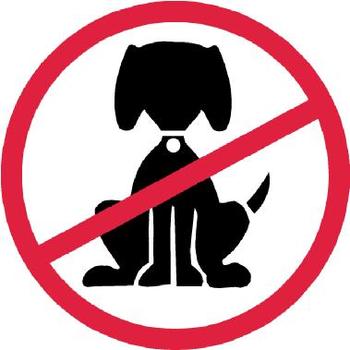 There’s an interesting sort of back-and-forth conflict in every known living space between animal lovers/pet owner and those surly-seeming, awkward people who just seem to hate any animal they see.  For those of us who have surrendered to the fact that our fur children are going to be playing large loving roles in our lives forever and ever and then some, it can be difficult to encounter those who just “don’t get it.”  Those who would rather cross the street, backtrack, run or even take the next elevator rather than risk a run-in with us and our pets – even when they are short leashed and VERY well behaved.
On a personal note, as someone who lives in a condo, I've had more than my fare share of scowls and assumptions made all because of Bear.  He is very obviously NOT a small dog and for some reason, there are those who find his face intimidating and frightening.  Personally, (in my darkest little heart of hearts) I think these people are either off their rockers or blind, because when I look at Bear, all I see is love and affection shining out at me from under his wonderfully bushy eyebrows.

Of course, we've all heard the stories:
“I was attacked by dogs”
“I’m deathly allergic” blah blah blah, but how much sympathy and understanding do we as dog owners show our fellow man when that fellow man strongly dislikes our pets for no apparent reason?

I recently stumbled across an older blog entry by  Ruth Pennebaker.  She very candidly reveals her dislike of all things canine as well as some very humorously worded reasoning behind it.

“ I really don’t like dogs that much.
There.  Oh, God.  Now I've said it.  There’s nothing less American, less humane, less sympathetic than admitting you don’t particularly like Man’s Best Friend.  It marks you forever as someone who can’t appreciate unconditional love and loyalty, who didn't worship Old Yeller, who objects to having her crotch sniffed and her leg humped.
What’s the rule I always hear?  Dogs and kids can tell if someone’s a good person; they can sniff out the loser, the infidel, the secretly snide and cruel, in a nanosecond.  They’re a character test that I’m sure I’ll always fail — even though I do retain a fondness for small children who belong to other people and aren't sitting next to me in a high-priced restaurant screaming their lungs out and slinging their forks and knives in my direction.
But, dogs?  They’re fine, at a distance, when they’re not jumping up and licking me.  “Oh, don’t mind him!  He never bites!” the ever-cheerful dogowners always say when their big, snarling cur comes rushing up to me at a park.  (Oh, really?  That’s what every news article I've ever read about a marauding pit bull says.  “He never bit nobody before he took an arm-chunk outta Junior the other day.  But, hey!  Junior’s still got his other arm.”)
It all brings back memories of the summer my family and I spent in Costa Rica in 1993.  We lived with a family that had a pit bull named Mickey.  I walked around in High Alert mode, sure the dog was going to lunge at my kids and I’d be forced to make a Sophie’s Choice between them.  But Mickey continued along, peacefully enough, till a cat wandered into his territory in front of the house.  The next thing we knew, Mickey was strutting around the house with the cat’s lifeless, bloody carcass hanging from his enormous jaws.  It wasn't the kind of occasion that encouraged trust or peace of mind.
But, I know, I know.  Most dogs aren't pit bulls and they don’t kill or maim.  Big deal.  I can still do without them.  A few days ago, our new neighbor’s yappy little furballs came bounding onto our yard — onto our property, for God’s sake — barking at our cat.  I could hear our neighbor calling out to them in her similarly high-pitched voice, which never seems to do any good.  She thinks her creatures are so adorable, it never occurs to her they might get on others’ nerves.
Since I was watering the flowers in our front yard, I turned around to greet the yipping little invaders.  The blast of cold water in their faces sent them right back home.  I’m sure I’ll be punished someday for this nefarious act — by a Higher Power that cleverly disguises His leanings by spelling DOG backwards — but I didn't care.  I loved the way they hightailed it back to their side of the street.”

So dog owners remember:  even though WE love and adore our fur children to bits – know their histories; their pains and troubles and joys – know how loving and affectionate they are – the random pedestrian on the street doesn't.  And while it may be hard for us to comprehend, some people just DON’T LIKE DOGS.   They’ll go to great lengths to avoid us and our pets out on the street, in parks or even in our own  apartments, condos or housing units, and sometimes it’s hard NOT do judge them for being so overly surly and sour.

Just remember, so long as they don’t move to harm you or your furry companion, leave them alone – not everyone has the capacity to open their hears to “big, snarling curs” and those that do are simply just a little more special.