If the Tables Were Turned 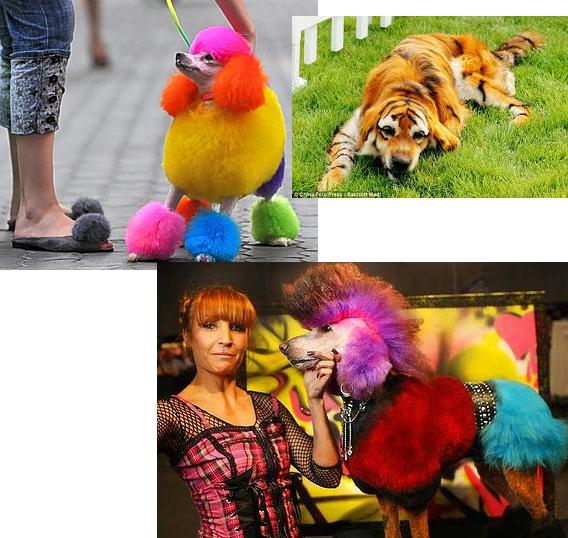 There is a very interesting standard where pet care is concerned - especially in the show and breeding world...or in the world of the rich and famous.

More often then not I've found myself unable to stomach watching dog shows, mainly because I feel so very sorry for these dogs that have been broken and re-shaped to be models and athletes in a way that is against the very nature of the animal itself.  It boggles my mind when I see dogs dressed to the nines.

There's a dog in my building who has a larger shoe collection than I do - and that's saying something.
I'm all for protective wear in dangerous or potentially hazardous environments, and I understand that by taking the dog out of the wild, we've already begun to curb various elements of it's natural instincts, but when we dye their fur to make them "fashionably appealing" or force them into various non-functional outfits (because they're "Oh so cuuute"), are we taking things too far?
And if forcing a dog's body into "flattering" but straining postures so that it can be weighed, measured and found wanting, or breeding and inbreed a specific breed to the point where its genes have mutated and caused life-threatening defects isn't considered "too far" then what is?
Where do we draw the line?

I've recently come across this humorous, if not somewhat cynical, article about the "Great Change: The Day Dogs Take Over and Give Back what they've Received"
"In light of all the horrible things we do to the beautiful, gorgeous, miraculous, loyal animals known as dogs, I feel I should warn you they are busy planning for the day they rule the world and humans become their pets. In fact, dogs already have a list of 10 Commandments for when this is so:

1. All humans will be forced to smell of our favourite scent – fox shit – and will be rolled in it daily, possibly at Harrods Fox Shit Spa, and possibly before receiving Harrods’ signature Fox Shit Facial

2. We will put humans to use as Guide Humans, Sniffer Humans, Guard Humans, Hearing Humans, Therapy Humans, Mountain Rescue Humans and Herding Humans – ensuring they provide dogkind with an excellent and unique service – but when we get bored of them we’ll dump them

3. Particularly tiny, cute humans will no longer be treated as human at all, and instead we will blithely dress them in tutus with matching hair-bows as if this weren't wholly diminishing and undignified for all concerned.

5. Instead of allowing humans to do their own thing, we will expect them to learn tricks, “play dead”, “roll over” and “act shy”, even though it is all utterly pointless.

6. To create humans that are pleasing to our eye, or fit some arbitrary standard, we shall expect them to interbreed until they have difficulty breathing, or their brains are too big for their skulls and they must writhe in agony all day.

7. All sick, elderly or annoying humans of the kind that kick off at the sound of a postman will be informed that they are going to spend the rest of their days happily frolicking at “a farm in the country”.

8. Lady humans will be forced to breed almost continually so we can sell their babies to any old fool.

9. All humans selected to contest in shows must sit in a cage all day while we will say to anyone who happens to ask: “But he loves it.”

10. We must always remember a human is not just for Christmas, particularly as the human rescue centers don’t open until the New Year. Still, you can always just tie one to the railing, walk away, and be done with it."

It's an interesting take isn't it?  Something to think about, at the very least....