The Truth (and History) Behind Puppy Mills 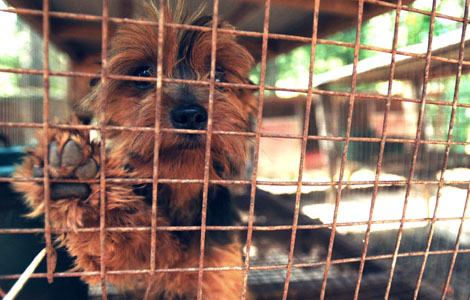 Puppy mills are one of the worst and most heart-breaking issues of the canine world, one that has recently been taken up by thousands of “anti-puppy mill” campaigns. But before you add your voice to the thousands already crying out in anger, take the time to learn a little bit about just HOW this horrific trend came about, and what goes on behind the scenes.

Puppy mills are a result of the growing public demand in purebreds and cross-breeds and the fact that female dogs cannot give birth to enough standard-meeting “perfect” litters to meet the demand. Introducing THE PUPPY MILL: offering large quantities of puppies for sale at a very cheap price, happily supported by a public that, until recently, had no idea what was going on behind the bars of these “new and improved” puppy-making machines.

The conditions in most puppy mills can be somewhat disturbing, especially for dog lovers. Puppies and their mothers are locked up in cages, receiving little - or sometimes no - human interaction at all. They are given just enough food to get by and minimal veterinary services. Adult dogs are often kept outside in unimaginable weather conditions and because it is a mass production establishment, the whole thing looks disturbingly like an overpopulated prison.
Because of the conditions in which they were raised, puppies that come from mills tend to have  more aggressive and anti-social behaviors once they are adopted or bought by a new owner.  It is quite similar to child psychology; a child’s behavior clearly reflects the society he or she grew up in. Even worse, if these children are abused to the point where they are never rewarded and often punished, their tendency is to not react to positive re-enforcement simply because they do not recognize it. The same kind of despair and negativity is felt by the puppies in puppy mills. They become confused, aggressive, and if not rescued and trained properly, may become a negatively labelled “problem dog” – one that is usually abandoned, returned or euthanized.

Thankfully, in light of the horrors that the animal victims of such establishments have been facing, many groups and organizations have been created simply to fight for the rights of these dogs.  There have been hundreds upon hundreds of letter-writing campaigns, and protests and animal groups have been gathering supporters left, right and center to stand against the sort of inhumane treatment of the dogs and puppies in these mills.
For those “civilian dog owners” who want to get involved, there are many things you can do –
> Avoid shopping at pet stores that also house a “dogs for sale” display.
> There on online petitions to shut down puppy mills posted daily on websites such as Care2.
> Help promote adoption by recommending it to any friend or acquaintance looking to purchase a dog, but most importantly,
> keep yourself informed.

Remember, it is only when we arm ourselves with the knowledge against our enemies that we can truly learn how to defeat them
originally sourced by the Dogington Post