No dogs allowed: In defence of man’s best friend

Email ThisBlogThis!Share to TwitterShare to FacebookShare to Pinterest
As seen originally on Metro News 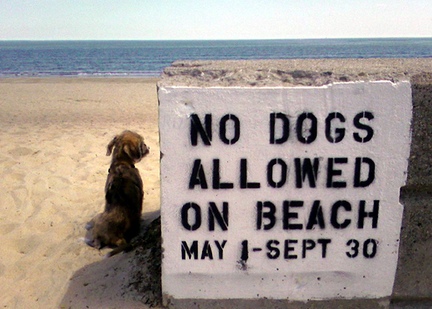 "The daily news is filled with reports of racism, sexism, ageism and absurd-ism  but a large faction of this country’s population silently faces a form of discrimination I like to call  anti-caninism. That’s right, people who hate dogs. You know the type; distinctly anti-social, but ultra-sensitive to child safety, hypothetical allergies or the physically challenged, as long as the disability doesn't require canine assistance.

Wherever dog owners gather, there is inevitably, some scowling curmudgeon hiding in the bushes taking video of puppies peeing on grass. Oh no! Now, we've exposed the children! For centuries, scientists have been mystified by the various causes of disease, but ‘Pooch Patrol’ has connected it all to dog urine. Parents beware: Your local park has not been sterilized for your kids’ protection.
We belong to a culture spoiled by the freedom to dismiss ourselves from all responsibility. Parents use children as the excuse by which to perpetuate their own ignorance, and we spout improperly learned notions as universal truths.

Now, I’m not implying that the enlightened 19-year-old at 7-Eleven is not thoroughly versed in Canadian law but I recently entered one while holding my 10-pound Maltese.

Apparently, just having a dog exempted me from the basic courtesies afforded to the general public, let alone patrons.
“Mister, you can’t have that dog in here!” She told me. When I questioned the hostility, she said, “It’s against the law.” (Gasp!) Am I a criminal now? Naturally, I probed further. “What about service dogs?” Apparently, our crackerjack legal scholar was ill-prepared for such meticulous cross-examination, as she responded with “Huh?” I specified, “What about seeing-eye dogs?”
And it was then that my clever foe truly earned the right to wear that plastic name tag by delivering a stunning rebuttal of “It never happens.”
Well then folks, I guess the law is clear.  Only it really isn't.

Canada’s Animal Pedigree Act prohibits animals from direct contact with food preparation. Beyond that, every province, municipality and establishment owner has their own unique set of rules.
Parks, malls and department stores can legally allow your dogs, only many of them choose not to. One manager actually admitted that it depended largely on personality. That of the dog AND its owners.

Hound-friendly malls and patios exist throughout Canada, but all it takes one anti-caninite complaint to spoil the show. It’s never about them. These are just selfless citizens doing their part to protect the helpless from your vicious Chihuahuas.

Friends, think of dogs as babies. They can be cute, and at times disgusting, but they are part of the population and deserve to share the world with everyone else. So let’s exercise a little tolerance and open public places to man’s best friend."

As a dog owner/pet-parent/dog lover, even I am not blind to the somewhat abrasive tone of this article; so I can understand why some of the reactions and comments to the post have been full of vitriol.  However, snarky-ness aside, the writer does bring up some VERY valid points.

On the whole, there are no places that Bear and I can go together in the area that we live, outside of the dog park and a few pet-friendly pet stores.  Even our local coffee shops (with the exception of one single Starbucks location) does not permit dogs - not even on the patio (enclosed or otherwise).
It tends to make socializing a little tricky.  For us pet-parents, life becomes a bit of a balancing act.  We teeter between making sure that our dogs are not left alone and un-stimulated for more than the average work day, while still participating is the daily social interactions that we, as human beings, require.
This is not unlike the daily lives of parents (to human - not fur - babies).  However, where they are permitted to take their babies out and about, we are not. 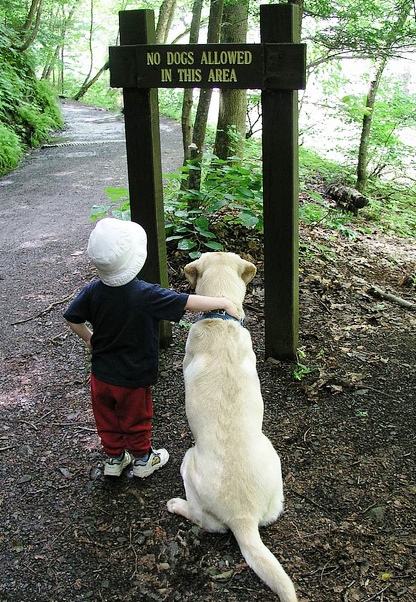 It's an interesting shift in perspective - and that's what we ALL need to realize (pet lovers and haters alike).  Once upon a time in the not-so-distant past, dogs were work animals and scavengers.  They were not brought up in houses or with specially designed beds, pillows, collars and leashes.  They were fed table scraps and generic-brand kibble.  Not the "organic/grain-free/high-protein/GMO-free/preservative free" food that lines the pet store shelves today.

It's a shift that needs to be acknowledged.  More people are adopting or buying dogs - not as pets, but as family members.  And whether the general population loves it or not, so long as dogs and dog owners (according to Canadian law and health standards) keep away from "direct contact with food preparation" areas, maybe vendors and shop-owners need to start loosening up their stringent rules.

This isn't to say that you should be able to walk your dog into a grocery store or restaurant......but a patio?  Why not?  Or a book store, or a mall, or even a Walmart/Target for that matter....Why shouldn't we be able to socialize with our leashed and well-behaved pooches?

...Who knows, maybe letting our dogs socialize with the rest of the general populace will help reduce the ridiculously high levels of dog-related phobias and social fears.....It's worth a thought, isn't it?

Join the conversation!  Let us know what you think about this issue, or the article in general